Walking down the bleachers to the racetrack where IMF had the stages set up, you couldn’t help but let out a sigh of relief, “I’m here. Time to be free and dance the night away.” And that’s exactly what I did.

You are instantly greeted by the stage, Disco Inferno, while entering the festival grounds. A fitting name for this fiery stage. This stage was designed to look like half of a disco ball, with flame throwers that lit up the whole crowd so you can feel that inferno. The first night, all bassheads gathered here. A little birdie told me that Squinto was going so hard, head bangers broke the rail! Second day, you can find all drum and bass fans here as Diesel Boy took the stage. Third day had to be my favorite day at this stage as it was Dirtybird Day! Legend and founder of Dirtybird, Claude VonStroke, closed the weekend out with a great set. All around amazing vibes as everyone danced, not ready to part with those feels.

Oceania was the main stage at this festival. Huge balloons in the shape of jellyfish danced through the crowd, while go-go dancers dressed as octopus gracefully added the underwater touch, even beautiful mermaids swam around in a fish tank by the stage. Headliners such as Flux Pavilion, Zomboy, Deadmau5, NGHTMRE, Fransis Derelle, and Black Tiger Sex Machine, left us wanting more here. Some of the best laser light show I have ever seen was at this stage too! This stage had refurbished “church pews” anchored at the stage for the best view. I’ve never seen another Festival do that. Such a cool feature!

One of my favorite stages I caught myself at many times was the 6 Feathers stage. This stage had many local DJs along with some DJs that live in Tampa with me. The stage might have been tiny, but it was always lit! One of my favorite sets actually came from this stage; Eddie Gold b2b Madhatter with surprise guest Nitti Gritti. Eddie Gold dropped some crazy bangers alongside Madhatter. ATL is truly blessed to have Eddie Gold as a local DJ! Innocent Victims, Pixelsaur, Blunts and Blondes, and Third Eye absolutely killed their set! Makes me so happy to see the boys I support at the local venues in Tampa out there doing their thing. Nitti Gritti even jumped on stage with Pixelsaur while he played a flip done by Nitti.

Pirates invaded the Shipwreck stage, but they spared me my life since I am a mermaid. Kevin Flum aka drinkurwater had the crowd so lit while the sun was going down at this stage. Perfect way to go into Sunday night.

Something that really caught my eye was the amount of live art at this festival! Artist had their easels set up through out the festival. Spray paint art, water color, and body paint are just a few examples of the creative souls expressing their love of art.

Imagine had a pool! I repeat, Imagine had a pool! The pool was only knee deep but filled with inflatable swans and ping pong balls. Perfect to dip ones feet off too cool off and watch main stage. I wondered over to the pool many times to cool off, enjoy an adult beverage, and watch the light show done by Laser Assassins.

I’m not even going to lie, I spent a good majority of my time eating. I love food, I cant help it! Imagine had some killer food options for everyone, including vegan options. But my all time favorite was Gouda Boys, the gods at making mac n cheese sandwiches. DO NOT MISS GOUDA BOYS AT YOUR NEXT FESTIVAL!! I actually ate there all three days. I have no shame at all.

Festivals have a way of bringing people closer in the most magical way possible. Imagine did exactly that with my crew. We laughed, danced, head banged, stuffed our face with food, and reached so many goals. I am so happy we all got to experience this beautiful festival together. I couldn’t ask for a better crew to go with! 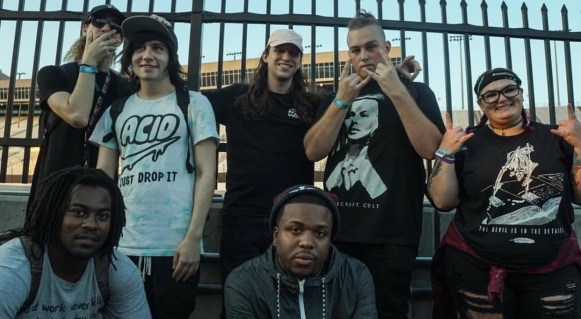 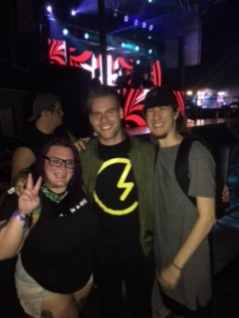 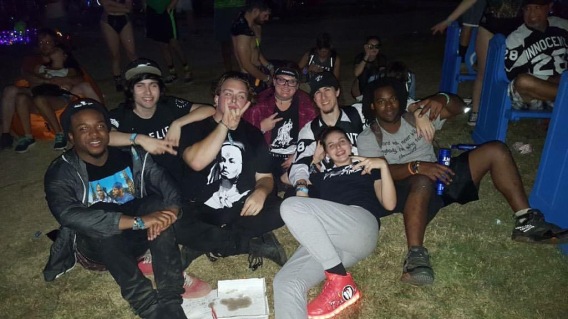 If you were a camper, you had the chance to partake in the best thing about camping fests, silent disco! This years silent disco was hella lit, going to 7 am all three nights. You were able to choose from house music or bass/trap/dubstep/riddim on the headphones. I love silent discos. It’s always so cool to look out and see someone in their own little world just jamming. Even the djs were into it! Blunts n Blondes blessed us bassheads with a b2b with Boogie T. Almost two thousand people were in that silent disco area getting down to some riddim.

I’m not going to lie, I’m still salty Ying Yang Twins did not show up. I was looking forward to whistling while I twerked, shaking it like a salt shaka, and whispering into a lil momma’s ear. Biggest disappointment of the weekend. You would think since they are ATL based they would want to show some love.

Thank you to the founders of Imagine and everyone who worked endless hours to put together the festival. The hard work and sleepless nights definitely paid off. I am very grateful for the opportunity that was given to me covering this festival. I can honestly say that Imagine is in my top five of festivals. Til next year!

One thought on “Imagine Music Festival was an Underwater Fairy Tale”