Illectric River Was FIRE in Every Way Imaginable! [Review]

Written By: RayTrill Harvey
Most Photos By: Andrew Murillo

It was a beautiful day on June 2nd as myself and my videographer packed up the car to head from Houston to New Braunfels, TX. New Braunfels is a city near San Antonio, Texas. It’s known for the Comal and Guadalupe rivers, which wind past leafy parks like Landa and Cypress Bend. The city has multiple campsites less than a mile away from the amphitheater where the concert was held and that’s exactly what we chose to do; camp. The heat was in the low hundreds during the day so if you choose to camp for the future, be advised to bring fans and anything to keep you cool during the day. At night, the temperature dropped down to the mid 70’s and was very comfortable for sleeping in a tent.

We pulled up to the festival just as doors were about to open, around 3:30pm ready to start our adventure. 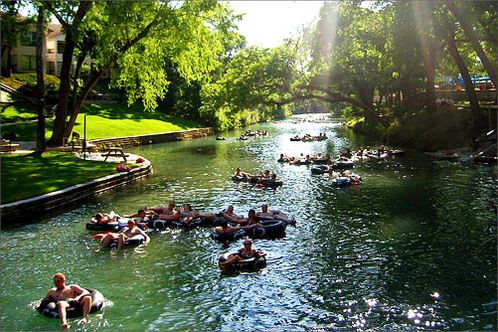 The festival was located at White Water Amphitheater, A venue nestled right on the river! You can actually float from your camp and pull up right at the back from the river! You could even pull your tube up and listen to the tunes from behind main stage. When you walk in to the venue there is a small stage to your right and a mega stage straight ahead serving as the main stage. A giant VIP area wraps around the main stage. Dirt covered floors adorned the venue and scattered trees provided some shade. Surrounding the smaller stage were blank canvases ready to be filled up by live artists during the DJ’s sets. Fan with misters were to the left of the main stage and proved to be true life savers.

The Vendors, The Food & The Drinks

Besides having an array of dope Illectric River merch, the fest was selling custom made fatheads with third eyes by one of the artists. The iridescent fanny packs were a huge win! The We Rave Hard booth was out in full effect and along with some other dope festival wear booths. A CBD oil booth educated attendees along with giving free samples of the uses of CBD oil!

It was SO hot, but all the frozen drinks and snow-cones kept you cooled down for the entire day! By the way, the prices were amazingly low for being at a festival, $4 for a snow-cone and $6 for a frozen margarita or pina colada. Whenever we were ready to grub, a DELICIOUS Cajun food truck provided us with some of the best fried alligator I have ever enjoyed.

During the festival, Illectric has LIVE artists painting and showing off some incredible skills and we were NOT disappointed. Some of the artists that painted were Nicky Davis, W3r3on3, El Pez, Denial, Clinton Millsap and Alex Ramos. Not only is it amazing to watch artists paint live murals to some of your favorite DJ’s throwing down but the outcome is outstanding. Below we showcased some of our favorites!

WHIPPED CREAM takes the cake for us, her set was full of every genre including her own insane bass filled songs and her stage energy was off the chain. Liquid Stranger played a heavy set that had the entire crowd in a bass filled trance. Champagne Drip Started off with some of his own softer songs and smoothly transitioned the crowd into heavier tracks! Getter was the perfect set to close on mixing dubstep and hip hop so effortlessly and making the entire crowd erupt. Jayceeoh & Party Favor were both high energy set full of tracks that had everyone in the crowd dancing and turning the fuck up. Said The Sky & Jai Wolf brought everyone right back into their feels. STS’s live snare drum player made for such an interactive set! Jessica Audiffred kicked off the main stage with a HUGE set that blew us away from an opener. CRWNS didn’t disappoint at all, turning the side stage into a trapfest.

(Please note, if we didn’t mention you, we may have missed your set)

It is HOT. If you attend next year, make sure you dress appropriately and wear plenty of sunscreen and take time to cool down.

What We Love & What Needs Improvement

We Loved: Every artist performance was great, nobody played an unworthy set. The food and drinks were bomb and so were the prices. The art was so dope and we think it’s a great combination of two forms of art. We were so impressed with how organized the festival ran and you honestly couldn’t beat being able to float to the location. Parking was convenient and cheap!

Needs Improvement: We think they could have added some more shade, maybe come canopies to block the sun and possibly more fan misters. We would like to make clear that this next particular thing has nothing to do with the festival or the event coordinators, it’s not under the festivals control. BUT the venue staff and New Braunfels Police did not treat the festival attendees well at all.

We give the festival a score of 9.5! We had an incredible time and enjoyed this one day festival more than any we’ve been to in quite some time. We highly recommend you check it out next year!

Listen to our latest TRILLVO In The Mix