Dreamstate, Insomniac’s trance-centric brand, returns to the Bay Area for the third annual Dreamstate San Francisco. This year’s lineup was so diverse with everything from uplifting and tech trance to even psytrance. Every Dreamer was satisfied to their heart’s content and a state of trance was in the air. Here’s a few reasons why we can’t stop talking about this year’s Dreamstate SF…

New for this year, Dreamstate SF featured not one but TWO stages of non-stop trance.

The smaller stage was hosted in the Larkin room, which allowed for more artists to be added to the lineup. While dominated mostly by psytrance on the 1st night, the Larkin room really shined on the 2nd night with the uplifting trance. The low ceilings and occasional popular sets did heat up the room a bit, but the overall vibes were on point. Plenty of couches were spread throughout the room for the hard stepping shufflers and dancers to rest their legs. The best part about the 2nd stage, it was so easy to hop between sets as the main stage was only a few steps across the hall through another set of doors.

With over 28 heart pounding sets during the weekend, these were a few of Trillvo’s top favorites…

Dreamstate SF saw the return of popular duo Key4050 (John O’Callaghan and Bryan Kearney) who played their first set together at last year’s Dreamstate SoCal (2017). Since then, the duo has played at popular events such as EDC Mexico, Transmission, and EDC Las Vegas. A big shoutout to all of the overseas artists who returned to the US for their second Dreamstate and once again dazzled the crowd with their performances: Blastoyz (Israel) and Factor B (Australia).

Arty‘s return as Alpha 9 for his second year at Dreamstate was warmly welcomed. After almost 7 years of absence, Arty returned as Alpha 9 at Dreamstate SoCal 2017. The Anjunabeats family saw some love from Ilan Bluestone who transformed the main stage with his progressive trance set. Out of all the main stage sets, Heatbeat vs.Chris Schweizer was one of the only harder tech-trance sets, which completely caught me off guard and I was pleasantly surprised.

Oddly enough, the Larkin room was full of its own twisted surprises throughout the weekend. During night 1, Captain Hook and Coming Soon!!! melted my mind with their progressive and dark psytrance sets. Monoverse and Davey Asprey caught the crowd’s attention during night 2 as people flocked to the smaller stage. Allen Watts was unable to play his set, so the other 2 DJ’s before and after him joined forces to absorb the time that Allen was supposed to play. The 3 hour back to back set between Factor B and Robert Nickson was absolute trance bliss. The melodic and uplifting sounds brought the whole crowd together into a state of trance, which ended night 2 perfectly.

Lasers and lights were on point all weekend long :).

All trance, all the time. You’re not living in reality anymore, you’re living in Dreamstate.

TRANCE – A big family reunion where uplifting and euphoric feelings from tracks unified everyone together with a deep level of harmony. There were smiles on faces as far as the eye could see, and even a few tears during intense spiritual moments.

A big shoutout to Insomniac for elevating Dreamstate SF for the 3rd year in a row using their creativity, passion, and love for trance. We can’t wait to see what happens at Dreamstate SoCal for TranceGiving now that tickets are on sale and the all-star lineup is announced. 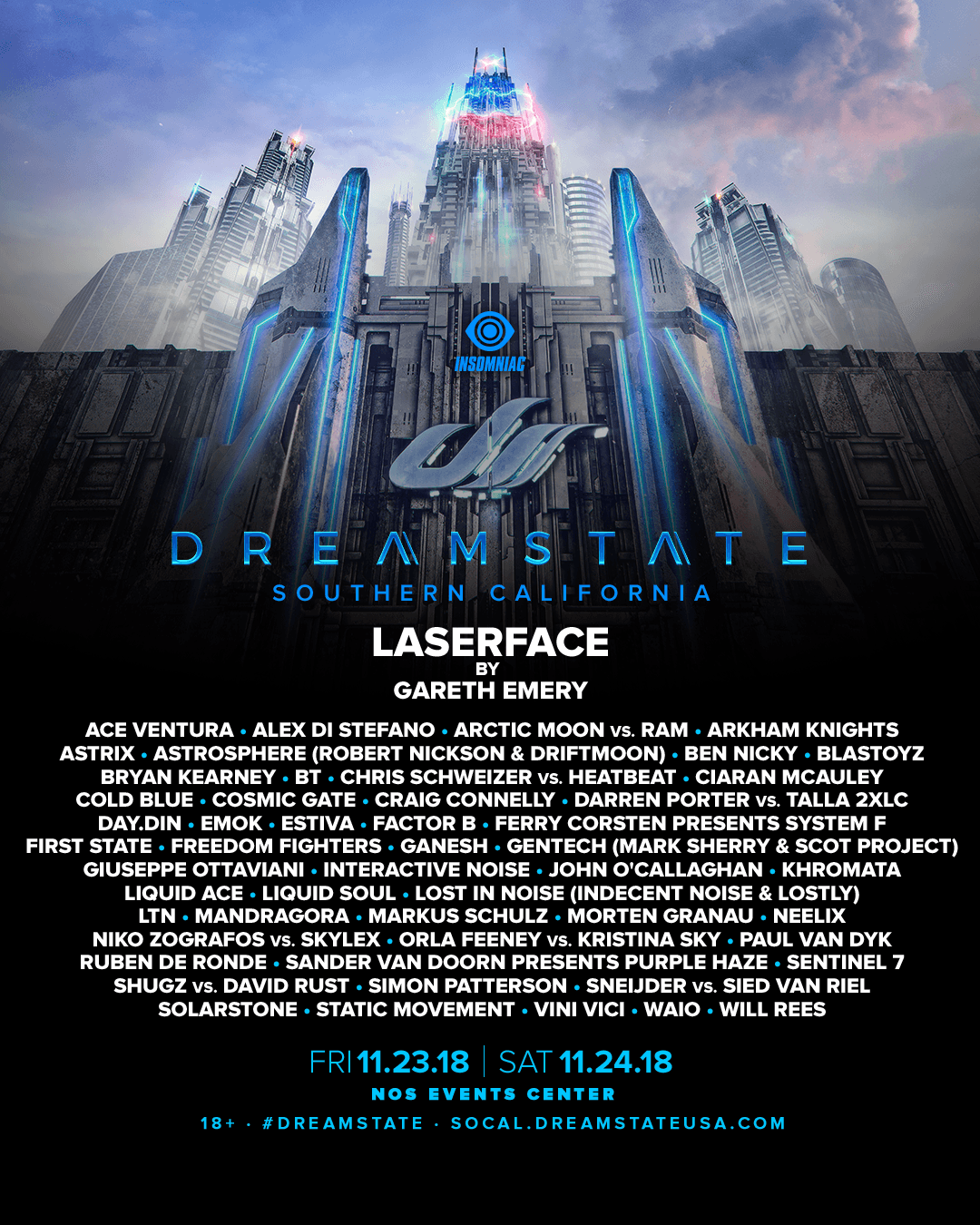