Cashmere Cat is back! This time around he’s added a new band member, meet PRINCESS CATGIRL. In an interview with Triple J he said he created the character for the music, though he is also the character; both human and digital cat. In the interview he described the mystery of hearing Daft Punk’s Discovery album for the first time and seeing the robotic getup for the first time as well. His interpretation of what he thought they actually were is what molded the concept of the character CATGIRL. Cashy let us know he is naturally drawn to the opposite of himself and this time it was a female digital cat.

On this album Cashy wanted it to be feature free as his last album, 9, was feature heavy. The vocals on the tracks are provided by some prominent and talented artists – however they only provided the base work from which Cashmere Cat molded together to create the PRINCESS CATGIRL vocals. He describes it as “hellium infused cold-brewed chipmunk,” but it definitely sounds WAY more marvelous than that.

The first track, “For Your Eyes Only,” off the sophomore album premiered earlier this month with the above accompanying music video. In the video we see CATGIRL whimsically moving between tress as strange search lights sweep through the forest. She then dances above the searchers before jumping down and being caught then, almost as if she wanted them to see, slowly disappearing.  Both the visual accompaniment and the track set the tone early for the grand majesty that is the full album.

The next track, “Watergirl,” is actually a pun to a VERY familiar song you’ve probably heard at least once or twice. The song builds up quickly then flips to what sounds like an almost angelic trap style with tinkering sounds layered on top. The playful lyrical distortion continues in the next track, “Back For You.” CATGIRL shows us some of her rap skills early on in this one. The ending is particular groovy with a slow down on the tempo and the bass transforming shape and getting DEEP. Some strings are plucked over what sounds like an old school kung-fu kick sounding effect. Its a quick groove I definitely want more of!

The next track, “Emotions,” also comes with a music video. In this one CATGIRL again dances whimsically once again between the trees. The day turns to night and a collection of watching eyes appear in the trees surrounding her. The video ends on a powerful note as CATGIRL dances in her digital world arms wrapped around nothing, but something…that something being Cashmere himself back out in the real world.

All the motion capture was actually done by the Emmy-nominated actress and dancer Margaret Qualley. Both videos also have an accompanying behind the scenes versions where they feature the mo-cap performance alongside the digital world.

“Moo” is up next and offers another pun for you to figure out. The track flows right in from “Emotions;” well all of the tracks flow together perfectly on this album to be honest. Sounds are juxtaposed masterfully on top of one another creating a very interestingly intriguing vibe that left me asking how did all that sound so damn good?!

The longest track of the album, “Without You,” starts off with a noticeably different sound texture from the rest of the album.  With flickering lyrics another amazement of sounds compiled together in a mystical way is more than achieved. Something so different but so beautiful. The lyrics get filtered down in the break as a bass hints in the back and chimes are lightly swept before the track transforms back to the familiar album song textures on the outro.

Closing out the album is the title track, “Princess Catgirl.” This one starts with a starry sounding harpsichord with the all too familiar sounds of a tiny cat meowing – sounds like begging for food if my cat language is translating correctly – till the apex is reached. A small break from the tension is provided then transferred to perfectly chill vibes that gives off the sensation of pure bliss and  just forces you to envision a happy place of relaxation.

You can catch Cashmere Cat and Princess Catgirl on tour starting this December. Check the dates below to see if they will be in a city near you! 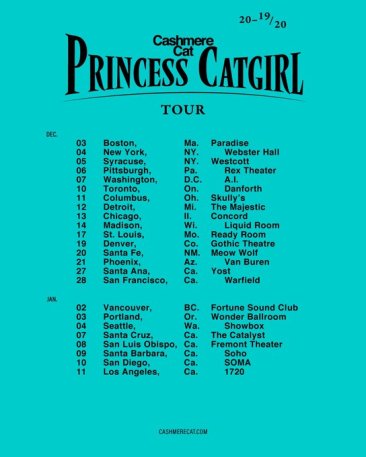